Jakarta – PT Hydrotech Metal Indonesia recently made effort to accelerate the application of national technology innovation on metal and mineral processing in Indonesia, through the signing of a Memorandum of Understanding (MoU) about "Education, Research, Community Service and Innovation Development" with Indonesia Institute of Technology (ITI). The signing of the MoU held virtually on Wednesday (23/2/2022) by President Director of PT Hydrotech Metal Indonesia, Widodo Sucipto along with Rector of Indonesia Institute of Technology (ITI), Dr. Ir. Marzan Aziz Iskandar, IPU. On the same occasion, President Director of Hydrotech Metal, Widodo Sucipto also signed a Cooperation Agreement (PKS) about "Joint Education, Training and Research", along with ITI's Deputy Chancellor for Academic, Research and Student Affairs, Prof. Dr. Ir. Dwita Suastiyanti, M.Si, HDI. President Director of Hydrotech Metal, Widodo Sucipto, emphasized that the cooperation built by Hydrotech Metal with various parties, especially academician (in this case ITI) and also research agency, will be able to accelerate the application and encourage the development of national technology innovation on metal and mineral processing in Indonesia. According to Widodo, Hydrotech Metal dares to be involved in research and development (R&D) of technology, because it wants to inspire businessmen in Indonesia in research and development (R&D) of national technology innovation that can help Indonesia to move forward. "We believe that Indonesia has academicians who are no less scientific than foreign academicians. Therefore, let's encourage the growth of a technology-based research and development (R&D) ecosystem in Indonesia, which can be implemented up to the commercial phase," Widodo said. In addition, Widodo also explained that the collaboration with Indonesia Institute of Technology (ITI) would provide space for ITI to implement the Merdeka Belajar – Kampus Merdeka program that they have, as well as improve the competence of lecturers from ITI in carrying out research and mastering applied technology. Regarding the Merdeka Belajar program, Rector of Indonesia Institute of Technology (ITI), Marzan Aziz Iskandar explained that through this program, ITI students are expected to be able to do internships and learn directly in related industries, especially in this case the material processing technology. Therefore, continued Marzan, ITI warmly welcomes cooperation with industry, especially industries that are the competence of ITI (in this case Hydrotech Metal). For information, PT Hydrotech Metal Indonesia is a business entity which is a subsidiary of PT Trinitan Green Energy Metal. Founded in 2020, Hydrotech Metal has a focus on research and development (R&D) activities for metal and mineral processing technology in Indonesia. (*) 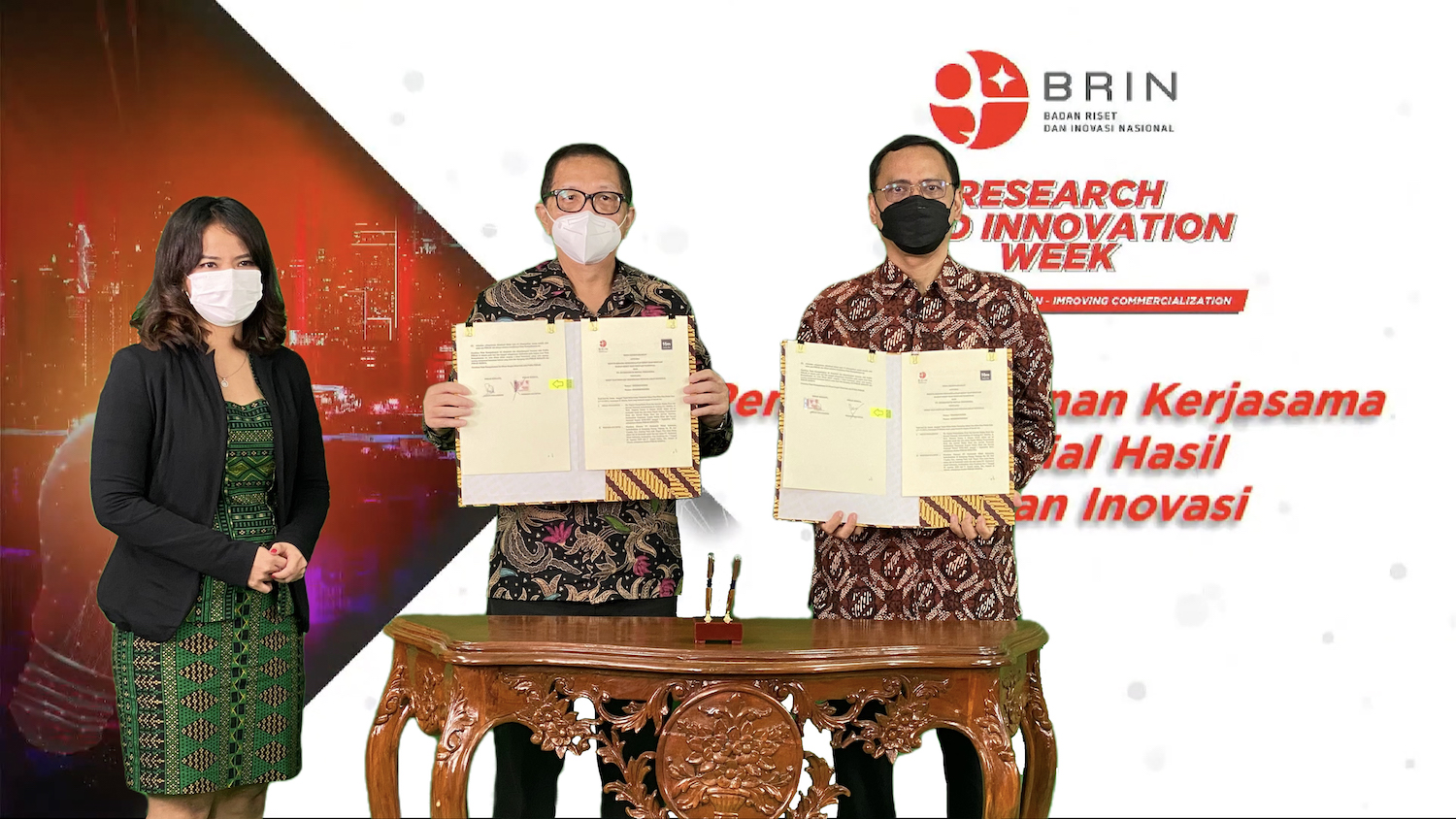 Hydrotech Metal to Collaborate on Research and Innovation with BRIN 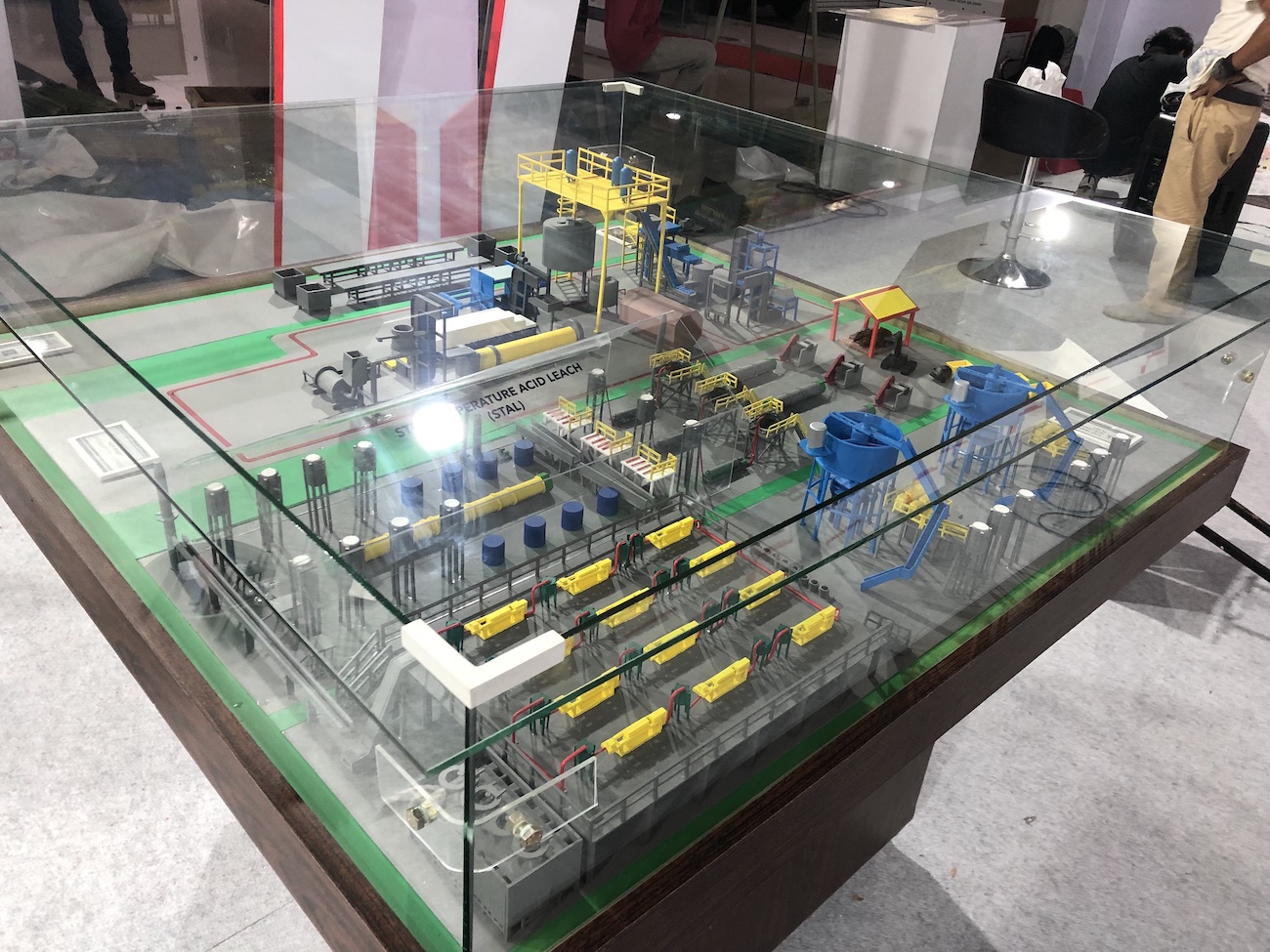 Jakarta - PT Hydrotech Metal Indonesia’s STAL Technology presented at the 2021 Indonesia Electric Motor Show (IEMS), held by the National Research and Innovation Agency (BRIN) on 24-26 November 2021. The exhibition event for electric-based vehicle innovation was held in a hybrid format from Kawasan Puspitek, Serpong, using "Innovation for Better Future e-Mobility" as its theme. STAL Technology (Step Temperature Acid Leaching) is a hydrometallurgical nickel processing technology owned by Hydrotech Metal, which is capable of processing low-grade nickel deposited in Indonesia, in an environmentally friendly manner and at a low cost. This national technology innovation has gone through a technological audit process from the Materials Technology Center of the National Research and Innovation Agency (PTM BRIN) (formerly the Agency for the Assessment and Application of Technology/BPPT) in May 2021. Currently, Hydrotech Metal is collaborating with PTM BRIN to produce advanced technological innovations from STAL that can process nickel ore directly into battery precursors even into battery cathode (the raw material for lithium battery), as well as discussing other opportunities for collaboration with BRIN in the form of laterite ore processing research, especially residue processing (waste management). "As part of the good relationship that exists between Hydrotech Metal and BRIN, we (Hydrotech Metal) have the honor to display infographics and mockups of STAL Technology at BRIN's booth. Therefore, we would like to express our gratitude to the Head of BRIN, Mr. Laksana Tri Handoko, and hope that this well-established collaboration can continue in the future," President Director of PT Hydrotech Metal Indonesia, Widodo Sucipto said. In the same booth, Widodo continued, visitors can also see the development plan of advanced technological innovations from STAL, to process nickel ore directly into the form of a battery precursor and even into battery cathode. That advanced technology, Widodo said, can also be used to process recycle from Lithium-NCM based electric vehicle batteries into battery cathode. "This technology innovation developed by Hydrotech Metal and PTM BRIN will play an important role, to advance the national electric vehicle battery industry with huge profit potential, since the upstream industry, which is nickel ore laterite processing can already use our own national technology innovation." Widodo said.For information, PT Hydrotech Metal Indonesia is a business entity that is part of the Trinitan Group. Founded in 2020, Hydrotech Metal focuses on research and development (R&D) activities for mineral processing technology in Indonesia. (*) 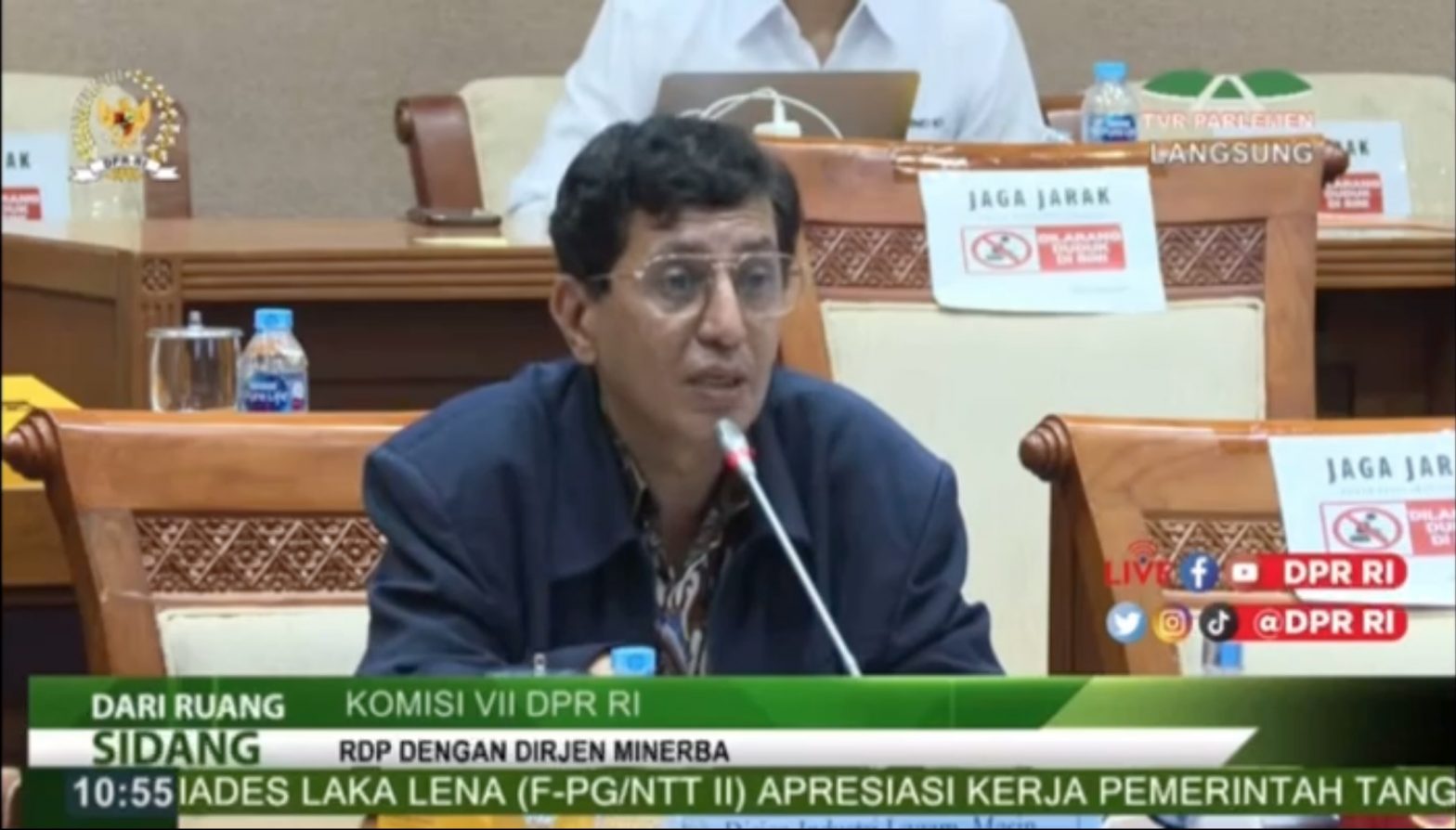 Jakarta – Director General of ILMATE (Metal, Machinery, Transportation and Electronics Industries) of the Ministry of Industry, Taufiek Bawazier, in a Hearing Meeting (RDP) with Commission VII of the DPR RI, Wednesday (10/11), said that technology plays an important role in (processing) minerals side. Furthermore, Taufik explained two approaches of nickel processing technology, which is the pyrometallurgical approach that is widely used today, such as Nickel Pig Iron (NPI), Ferronickel, and Nickel Matte, as well as the hydrometallurgical approach, which he mentioned, will have an important role in the future to increase the added value of a low-grade nickel. "From the hydrometallurgical point of view, it is also very important, so that later low-grade nickel can be processed, so the chemical approach, which may have been conveyed earlier, HPAL, High Pressure Acid Leaching, and also perhaps what is now being developed by our fellow Indonesian as well, Step Temperature Acid Leaching, it will also have an important role in the future to increase added value for low-grades (nickel) because all minerals have varied nickel content," Taufik said. Separately, PT Hydrotech Metal Indonesia as the owner of Step Temperature Acid Leaching (STAL) Technology, responded positively to the views of the Director General of ILMATE who took into account the important role of STAL Technology in the future. "We appreciate this point of view. This is very positive, and we hope that STAL Technology in the future can be useful for many parties with the spirit of advancing the nation," President Director of PT Hydrotech Metal Indonesia, Widodo Sucipto said.  Furthermore, Widodo also revealed one of the advantages of STAL Technology, which is the modular system that they used, with a minimum output of around 1,800 tpa (tons per annual) and lower capital expenditure (Capex). “This modular system is a solution to funding problem in smelter construction. Through the presence of STAL Technology, fellow IUP (Mining Business License) owners do not have to bother looking for funds up to billions of US Dollars just to build a smelter,” Widodo said. According to Widodo, STAL Technology produces competitive carbon emissions compared to existing hydrometallurgical-based nickel extraction technologies. And with a modular scale, Widodo said, STAL has the potential to reduce fossil fuel consumption through the use of renewable energy sources, such as hydropower and solar power, so that carbon emissions can be significantly reduced. In a technology audit conducted by the Materials Technology Center of the National Research and Innovation Agency (PTM BRIN, previously Agency for the Assessment and Application of Technology [BPPT]) recently, STAL Technology was proven to be able to produce nickel recovery from 89 to 91%, and cobalt by 90 to 94%. Meanwhile, the STAL Pilot Plant has also been proven to be able to produce MHP (Mixed Hydroxide Precipitate) with a Ni (Nickel) content of more than 35%. (*) 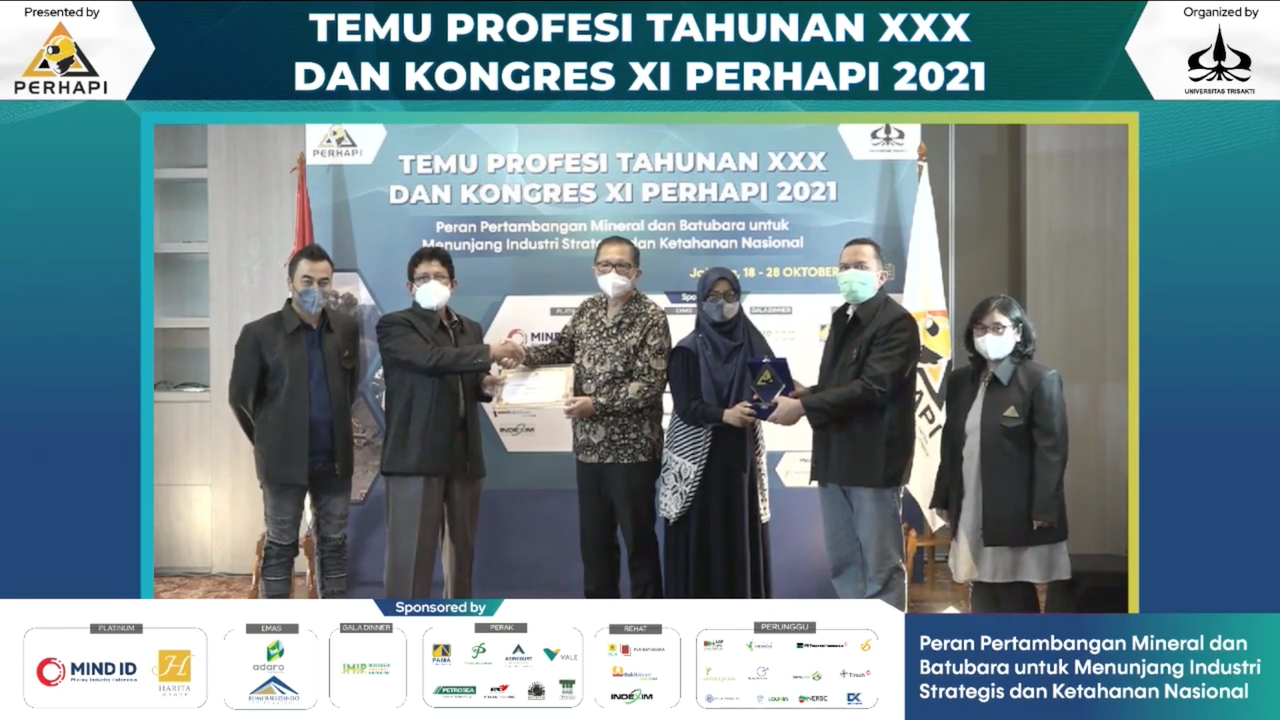 Jakarta - PT Hydrotech Metal Indonesia won an award from the Association of Indonesian Mining Experts (PERHAPI) in the field of Technology, on developing STAL Technology as a "Pioneer in Increasing the Added Value of Low-Grade Nickel Ore Processing and Purification". The awarding ceremony was held in a hybrid way (online and offline) on Wednesday (27/10), at the 30thAnnual Professional Meeting (TPT) and the 11th PERHAPI Congress which carried the theme "The Role of Mineral and Coal Mining to Support Strategic Industries and National defense". PERHAPI is an organization consisting of mining experts in Indonesia, and has a function to facilitate its members and the mining community in general so that they can contribute ideas to the development of the mining sector in Indonesia. President Director of PT Hydrotech Metal Indonesia, Widodo Sucipto expressed his gratitude to PERHAPI, for the award that had been given to Hydrotech Metal on developing STAL Technology. Widodo also hopes that the technology created by the national technological innovation owned by Hydrotech Metal can contribute positively to the progress and prosperity of Indonesia. According to Widodo, PERHAPI considers that STAL technology is the national technological innovation which can utilize low-grade nickel ore as raw material for EV (Electric Vehicle) battery, with the advantages of Capex and Opex which are much more competitive, and environmentally friendly. Widodo also explained that before winning the PERHAPI Awards, Hydrotech Metal had gone through a virtual presentation stage, which was responded to by metallurgical experts in Indonesia such as Prof. Dr. Zaki Mubarok and Dr. Zulfiadi Zulhan. “The virtual presentation was held last month (September) in front of experts. After going through that stage, we were successfully selected as one of the candidates for the PERHAPI Awards in the field of Technology, and thankfully, we were later named the winner of the award. This is a proud achievement for us.” Widodo said. For information, PT Hydrotech Metal Indonesia is a business entity that is part of the Trinitan Group. Founded in 2020, Hydrotech Metal has a focus on research and development (R&D) activities for mineral processing technology in Indonesia. Meanwhile, STAL Technology (Step Temperature Acid Leach) is a hydrometallurgical nickel processing technology owned by Hydrotech Metal, which is capable of processing low-grade nickel that has been deposited so far, in an environmentally friendly manner and at a low cost. (*)